This is one of the many reasons why I love London so much. This city offers an incredible variety of restaurants with cuisines from all around the world. But what’s just as thrilling is the rise of British food. After many decades of rather poor international reputation British cuisine is emerging thanks to a talented generation of chefs who work hard to revive the historic British recipes (e.g. Heston Blumenthal at his restaurant Dinner) or to create new exciting dishes using fresh local produce.

This post is about two London restaurants I visited very recently. I absolutely recommend them both to everybody who lives here or comes to visit London. One is Kurobuta – a Japanese restaurant by an Aussie born chef, and Rabbit – a British food venture run by three brothers from West Sussex. There is a reason why I am writing about them in one post – they have quite a few things in common. First of all, location – both are on the iconic Kings Road in the heart of vibrant fashionable Chelsea. Secondly, the concept of small plates – tapas sized portions designed to share. Furthermore, an extraordinary and innovative approach to cooking, their down to earth hip and rustic interior and last but not least, price level – similar with a total bill of ca. £85-95 for two with a round of drinks. Now to each in more detail.

I’ve been hearing good things about this restaurant from a number of foodie friends for a while, and after having tried for weeks I finally managed to get a table for two on a Sat night on short notice (same day that is). The only table available was at the window with seats next to each other, rather than facing each other. I strongly recommend to book in advance for a proper table, as in winter you will inevitably get the cold draft from the entrance. Before I start virtually teasing your taste buds with food pictures, a bit of a background to the guy behind the venture.

Scott Hallsworth is an Austrialian born chef who had spent seven years working for Nobu in London, first as chef de partie and then as head chef at Nobu Park Lane for 6 years, followed by some years in Dubai. In 2013 Scott started developing the Kurobuta concept which was first set up as a pop-up in Chelsea, which later went permanent and was followed by the second venue in London Marble Arch.

Click through the food pictures with captions below (apologies for the not so great photo quality). I was impressed by almost every dish, except maybe for the aubergines which I found a bit too soft  and squishy in texture. The biggest surprise for me, believe it or not, were the edamame (yes, edamame! hard to believe how delicious simple edamame beans can be if you put some extra thought into it!)

You absolutely MUST order these to start with – Flamed Edamame with Sake, Lemon, Butter and Maldon Salt

Since the choice of wines by the glass was rather limited we happily decided to go for sake and cocktails instead of which the selection was very good. The decor is simple and hip in style with wooden tables and chairs and graffiti on the walls. Service is very friendly and attentive.

This restaurant I discovered completely by chance on my way back home from grocery shopping. It looked very lively yet cosy inside and I knew I got to try this new place very soon. It has opened its doors this autumn and is the second restaurant of the Gladwin brothers after The Shed in Notting Hill. Gregory, Oliver and Richard grew up on a vineyard and farm in West Sussex where their culinary venture has its roots from. Each of the brothers is responsible for various aspects of the business: Gregory is the farmer and supplies the produce, Oliver is the head chef and the mastermind behind the food (he previously worked at Oxo Tower) while Richard runs the restaurant as general manager.

I saw on their website that the restaurant holds tables for walk-ins so decided to give it a shot on a Saturday night. Not surprisingly, the place was full and we were offered seats in the bar area which runs the same menu as the main restaurant.

First thing that strikes you is the interior. Tractor parts are used throughout as decoration and even furniture items: tractor seats as bar stools, tractor bonnet hanging from the ceiling holds spirits bottles and a tractor door decorates the wall. Self made wall mounted wooden wine racks, fresh squashes of all sizes and shapes all add charm and cosiness of the atmosphere (maybe not so much the fox bum & tail sticking out of a wall but luckily it was behind my back and out of my sight).

As I mentioned already, the dishes come in tapas sized portions and 2-3 dishes are recommended per person. The menu changes daily and is divided into sections: mouthfuls at £1.5 each (these are literally mouthfuls and work like amuse-bouches), cured meats from the house-farm and the mains consisting of slow and fast cooked dishes. The photos below show the items we have ordered while I am certain to be back quite soon to taste more. My two favorites were the lamb chips (pulled lamb meat deep fried in bread crumbs, comes with delicious harissa sauce and melts in your mouth!) and the Brussels sprout hazelnut cheddar apple salad (which you just have to go and try for yourself!) In fact, all dishes were marked by quite extraordinary and refined flavours, which – although they come from rather common ingredients – were very unique in combination. 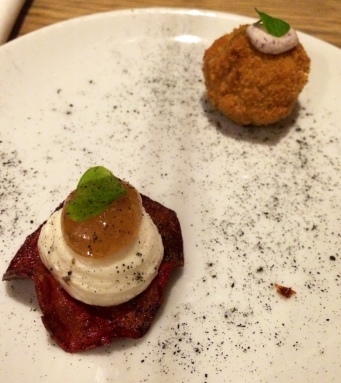 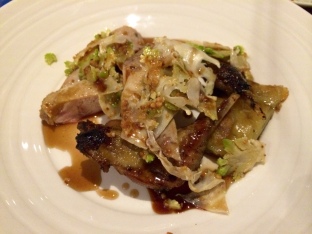 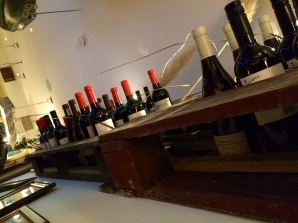 Wine racks over your head

The wine list isn’t very extensive but offers a very decent selection by the glass, carafe and bottle. Service is attentive and eager to please and to explain the dishes. A request we had in regards to one of the dishes was executed carefully. This is a place I will definitely be coming back to, but next time I will book in advance to sit in the main restaurant.

For addresses, menus and other details visit the restaurant websites: KUROBUTA  /  RABBIT