The idea of SweervyWine & The City (or #SweervyWineAndTheCity on Twitter and IG) was born when the local wine merchant Armit Wines have announced a competition to win a trip for two to Rioja, Spain. One had to take a photo of any bottle of wine from the producer La Rioja Alta with a famous landmark and publish it on either Twitter or Instagram with the hashtag #LaRiojaAltaWorld to be in for a chance to win the trip to the winery.

After being extremely lucky to have won a trip to the Ornellaia winery in Tuscany just a few weeks before, I was determined to win the Rioja trip as well. After all, lucky streaks do happen! (Btw, I’m going to Ornellaia late September, so make sure you follow my blog to be notified of the report going online! 🙂 )

So there I was, with my one year old daughter in tow and a bottle of 2008 Viña Arana Rioja Reserva in the pushchair’s storage basket and camera hanging over my neck (looking and feeling very touristy), hitting up London’s landmarks hoping to take if not award winning then at least holiday winning photos.

I didn’t plan to publish more than one or two photographs for the contest but my competitive spirit has taken over my mind and I just couldn’t stop. It became a whole lot! Without elaborating too much on expressions on people’s faces while I was taking those photos of a wine bottle elbowing my way through the crowds of tourists, the majority of them were probably thinking “What’s wrong with you, mama?!”

It didn’t take long until the competition bug bit my dear husband… We ended up getting a second, different bottle (this time a 2007 Viña Ardanza) to take even more pics for him to enter the competition as well! 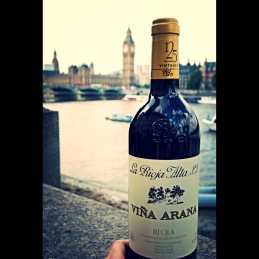 The “apple” of the London Eye

When a London bus knows what’s best for your wine 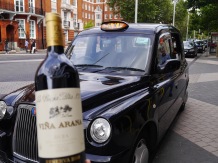 No drinking and driving happened here…!

..and certainly no drunk dialing the ex 🙂

Enjoying a quiet moment at the Battersea Park peace pagoda

Posing with the Marble Arch 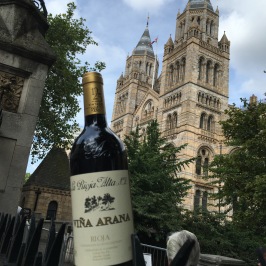 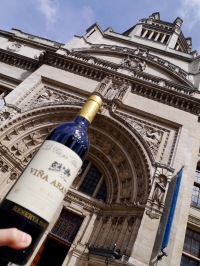 …and the Serpentine Gallery. 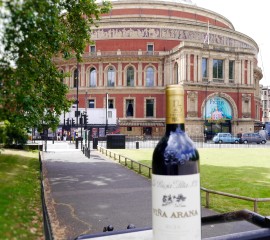 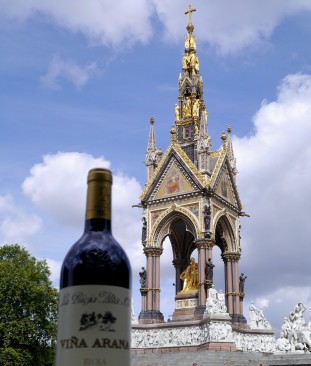 Enjoying the view of the Serpentine in Hyde Park

and pay a visit to HM the Queen

No London tour is complete without the obligatory photo with the Queens guard, …

…who thinks this wine is a stunner!

One exhausted bottle of Rioja taking a short break before heading home to join her friends in the cool wine cabinet!

In the meantime, after letting it rest in the wine cabinet for a few days I popped that bottle of Viña Arana and paired it with homemade lamb cutlets & roast potatoes. I love to drink Rioja with my lamb and this was certainly a fantastic pairing. This however, is such an elegant expression of Rioja (which is typically best enjoyed with food), that it was just as great (if not better!) on its own after dinner!

Both wines featured in this series are available at a number of retailers. I purchased my Viña Arana from Waitrose and the Viña Ardanza from Majestic Wine.

Now that SweervyWine & The City has developed into a project of its own I will certainly continue creating new series as I travel, explore and discover beautiful places and wines. Therefore sign up for updates on my blog and follow SweervyWine on Facebook, Twitter and Instagram!